Now we could spend a lot of time telling you about the great things we’ve done (like being one of only two bands to play at the original Millenium Dome, or playing at the Ritz, or Cliveden, or Kensington Palace)  and the great people that we’ve played for (like Dave Stewart, Mick Jagger, Joss Stone, Andy Williams, Denise Van Outen, The Opera Babes, Abba Gold and so on).

But that’s not relevant.

What IS relevant is that between us we’ve played at over two thousand weddings – including Paul’s – and not only do we know what it takes to make your big day finish with a big bang, but that experience allows us to take any variables or last minute hiccups that occur and deal with them in our stride.

But don’t take our word for it:

“I know Pete very well and I can honestly say that you are in very safe hands….not only is he a great musician, but far more importantly he understands what his clients want – which is to dance and have a great time – and  Carte Blanche  deliver that.  Every. Single.  Time.”

Booking A Band For The First Time?

As well as managing and playing in a great band, we are committed to being the only band website in the UK that educates people like you about what to look for when they’re thinking about booking a band.  The worst wedding story I ever heard was of a bride who asked her live band to stop playing as they were ruining her wedding.

Here’s our recommended list of articles to get started with:

How Much Does A Live Band For A Wedding Cost?

10 First Dance Suggestions For Your Wedding

Why Should I Book A Live Band And Not A DJ?

The Advantages Of Booking A Live Band/Live Wedding Entertainment Directly

“New Years Eve could not have gone any better.  Carte Blanche were absolutely fantastic.”  Mathew Rivett, Operations Manager at The London Ritz.

“A privilege to work with the band…exceptionally talented…” Nigel Lythgoe, LWT

“Without doubt the most appreciated act of the day!” Simon Littler, BBC

Here’s Peter rocking out in the BBC Puppet Studio: 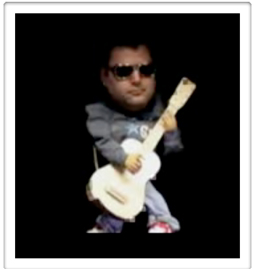 Peter plays bass and lives in North West London.  His favourite film is The Big Lebowski and in his spare time he writes music for adverts and sound libraries.